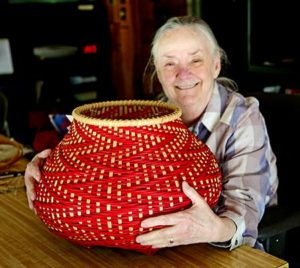 Basketry is actually Billie Ruth Sudduth’s second career. She spent almost twenty years as a school psychologist. In 1983, after a particularly demanding year, her boss suggested she do something for “fun” over the summer. Knowing of Billie Ruth’s love of baskets, it was suggested she take a basket making class at the local community college. The four Monday night sessions cost twenty dollars but totally changed her life. After fifteen minutes in that class, she knew she had found her life’s work. The early years were demanding because she maintained her professional career, was a wife and mother of two sons, (which included soccer, cub scouts, children’s theater, baseball and such.) Sixteen hour plus workdays became the norm and cooking and housework became extinct, indeed arts lost in favor of a new art form. (She is now the grandmother of nine).

In 1989, Billie Ruth left her career to pursue basketry full time. It is appropriate that her baskets became mathematically based, having spent her professional career with testing, measurements, statistics, and math. Ironically, as a high school and college student, she hated math. She met Fibonacci, a thirteenth century mathematician, while teaching a “Math in a Basket” class in a middle school. Incorporating Fibonacci numbers and the Nature Sequence in all her baskets created a style that was immediately identifiable and captured the attention of museum curators and collectors alike.

Fibonacci discovered that the same proportions occur in spirals throughout nature, whether it is the spirals in seashells, flower petals, the caps of acorns, or pineapples. The distance between the numbers in the proportion theory approximate the golden mean or the golden ratio, which has unified design since ancient Greece. This discovery had a profound impact on the world of art, music, and architecture. Michelangelo used the proportions in creating the statue of David; Bartok used the numbers and ratios in his music, and Frank Lloyd Wright in his architecture. Billie Ruth Sudduth uses the proportions, ratios, and numbers in her baskets. When responding to her work, you are responding to the same proportions that occur throughout nature. The weaving uses a mathematical structure of spiral growth found in nature to create baskets with a rhythmic, naturally flowing design. She does not separate herself from nature but through her weaving affirms being a part of it. Billie Ruth is currently pursuing chaos theory, fractals, and sacred geometry and incorporating that research into her basketry.

As the saying goes, the rest is history. Billie Ruth’s baskets are now in the collections of the Renwick Gallery of the Smithsonian Institution, the Museum of Art and Design in New York, Charles A Wustum Museum of Fine Art in Racine, Wisconsin, the Mint Museum of Craft and Design in Charlotte, the Asheville Art Museum in North Carolina, and the Montgomery Museum of Fine Arts in Alabama. They are also included in corporate and private collections. Her highest honor came in 1997 when she was named a Living Treasure by the State of North Carolina. This award, presented to one craftsperson every other year, is the state’s highest honor in the field of crafts. She was the tenth recipient of this award and the first female to be honored. In 2002, she was awarded the Alumni Achievement Award by her alma mater, Huntingdon College, and in 2005, The President’s Medal for Achievement. In 2004-2005, she was awarded an Individual Visual Artist Fellowship by the North Carolina Arts Council. In 2008, Billie Ruth was honored by being named to the Order of the Long Leaf Pine, the highest honor awarded by North Carolina Governors. She was invited to be Honor’s Day speaker at the University of Alabama (where she received her master’s degree). She was selected to exhibit at the prestigious Smithsonian Craft Show for thirteen years. 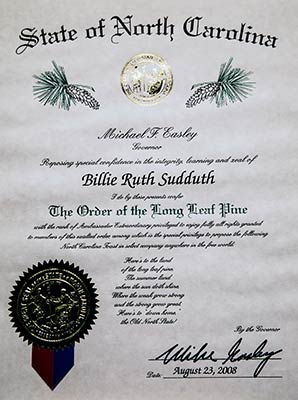 Billie Ruth has extensive basket teaching experience at Penland School of Crafts; John C. Campbell Folk school, and Arrowmont as well as conducting numerous workshops throughout the country. In October 2005, she was the keynote speaker at the annual conference of the North Carolina Association of Educators in Art. She is a charter member of the North Carolina Basketmaker’s Association and the National Basket Organization. She is an exhibiting of the American Craft Council, Southern Highland Craft Guild, Piedmont Craftsmen, and Carolina Designer Craftsmen.

Over the past 34 years, Billie Ruth has experimented with all the basic techniques of basket making but quickly discovered a love for twill work and hand shaping cat’s head forms. No molds are used in any of her work as she explains the excitement for her is creating the shapes and never quite knowing what it will look like until the piece is completed. Her favorite dyes are all natural–iron oxide, henna, and madder. The reds are combinations of the above with the magic of her well water, a 300 foot well in mineral rich Mitchell County, just over the ridge from Penland School in the Western North Carolina Mountains. Her materials of choice are European Cut reed that is becoming increasingly difficult to obtain.

Billie Ruth feels one of her contributions to the field has been getting baskets off the floor and onto pedestals. She describes her baskets as being made to hold your interest, not your objects. Her passion for basket making is as strong as it was when she made her first basket 34 years ago. She still spends 10 plus hours a day in her studio making baskets, collects them, and writes about them.

JABOBS – an acronym for Just A Bunch Of Baskets, is the name of her business.

HGTV and CBS Sunday Morning have featured Billie Ruth’s baskets as well as several PBS features. American Craft, American Style, and The Smithsonian Magazine have shown her work numerous times as have dozens of other publications, magazines, and books. She is the author of four books on basketry with Baskets – A Book for Makers and Collectors being translated into German with the title Korbe Design.

Below, we invite you to enjoy a video produced by UNC-TV that features Billie Ruth and her craft.